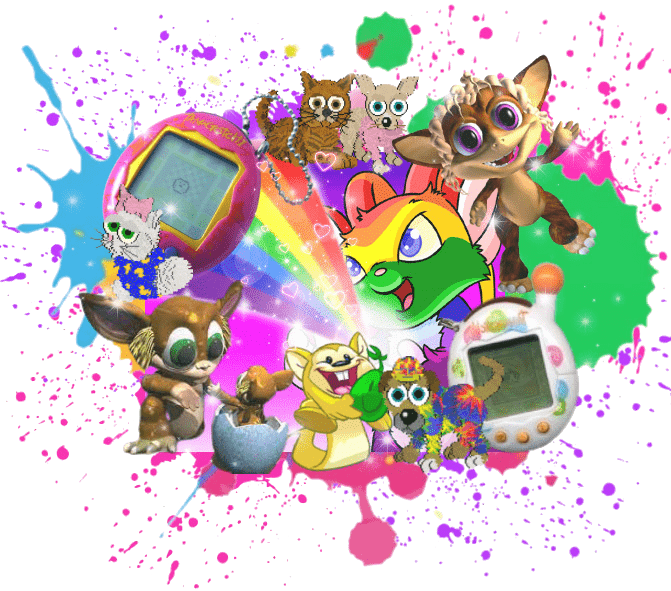 The chokehold grip that virtual pets had on the youth of the early 2000s is hard to describe, if you didn't live through it yourself. The concept of a virtual life that you could raise and cherish had everyone entranced, and it came in so many different forms: from little devices that you could carry in your pocket, to robotic creatures that responded to your voice, to fantastical animals that lived in your web browser. Kids and adults alike loved pets, so if you couldn't enjoy a pet in real life, why not enjoy one in a digital world...?

Gif by chewynecklace on Tumblr

1995 - Petz franchise is created. The concept was to adopt and raise virtual dogs and cats on your computer screen. You could also breed your pets to create offspring with brand new colors. This series ended up having a long lifespan with many different spin-off titles.

1996 - Creatures releases their first game in the franchise. This game took the idea of "artificial life" to the next level, giving players control over an alien world and its inhabitants, with the end goal being to raise and educate the creatures and re-populate the landscape. The alien race, called "norns", are controlled by complex AI, and are capable of learning language and communicating with the player and each other.

1997 - Popular Japanese toy Tamagotchi makes its way overseas. The keychain virtual pet toy was a huge hit, and there were many other toys that tried to market similar concepts. The pet grew from an egg, and aged in real time, so the player had to check it often to keep it alive and happy.

1999 - Broswer game Neopets launches, popularizing the concept of online virtual pet games. Users could care for a number of fantastical different creatures, play flash games to earn currency, and meet other players in the forums.

To many that are interested in web design and programming, the fan communities around virtual pet games were their first introductions to HTML. It was a gateway to learning web design languages and picture editing programs, as young minds strove to develop the perfect graphics and fantastical mods to bring their shrines to their beloved digital creatures to a whole new level. 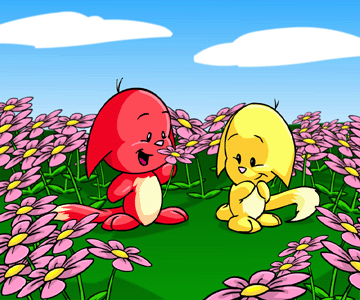 Before we delve deeper into the virtual pet fandom, let's look at the psychology behind it. How far do folks go when it comes to imaginary animals...? The answer is--a lot farther than you think. Creator of the popular "Petz" series, Rob Fulop, has once discussed how a fan had kept her virtual dog for 15 years. There are websites filled with eulogies for recently-deceased tamagotchis. Carefully-kept blogs detailed the ins-and-outs of raising a virtual pet, while other fans took up the pen to create their own unique worlds through fanfiction. On the flip side, there were even "torture" campaigns for virtual creatures, with fansites detailing the methods and mods for the most brutal techniques.

So it's safe to say that virtual pets, despite their physical limitations from being inside a computer, still managed to touch the hearts of their owners. Much like how a beloved pet in-real-life becomes an important part of the family, these "pretend" pets managed to create similar bonds with their caretakers...and this stirring of their heartstrings possessed them to create.

Gif by Anchoress-Petz on Tumblr

For many virtual pet games, heading to the internet and making a fansite for your dear pets was a part of the experience. The Petz games were a pioneer in this, even providing free graphics in a "Web Fun Pack", to make building a fanpage quick and easy for inexperienced coders. The game's official website had a forum where sharing your game files with other players were encouraged. You could "adopt" pets from other players, and use the "matchmaker service" to breed their pets to create the perfect show animal. These examples formed the culture which would soon explode into a colorful and thriving scene of enthusiasts, many of whom would go on to start their own forums: 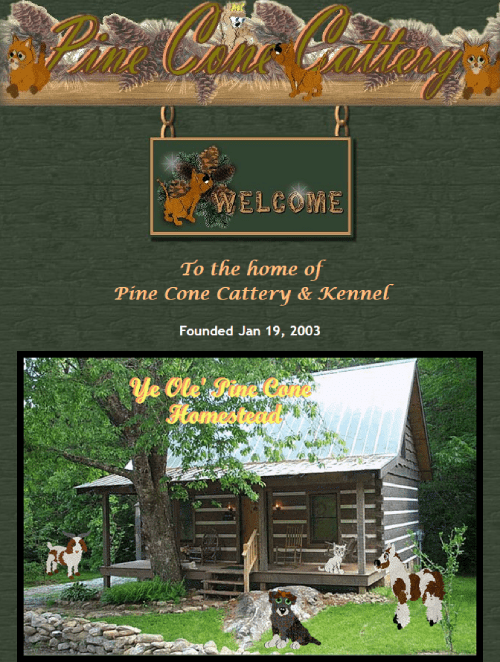 Fansites became very creative: kennels, catteries, and even full-on zoos were created to show off families of Petz. But the most popular past-time was creating mods through "hexing"--a process involving editing the game files to turn a pet or item into something new. This opened up so much more freedom for players. Suddenly you could have designer dog breeds, critters from other virtual pet games, or something completely out of this world! 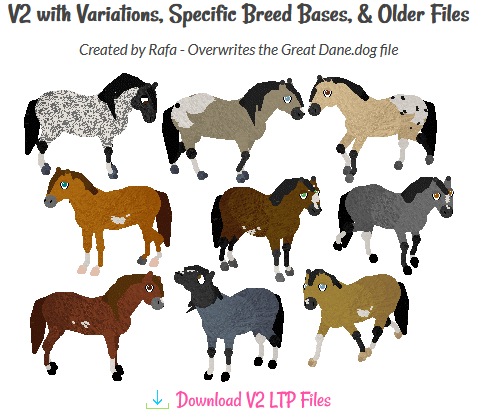 Hexed petz that have been turned into horses, provided by Seeing Star's Site

This modding extended to toys, clothing, and even the scenes that your petz played in. These new additions breathed fresh air into the game, and enthusiasts continued making new creations regularly. New designs were shared on forums and websites, and people showed off their gorgeous creations in (virtual) pet shows.

Custom scenes of a trophy showroom for award-winning Petz, creative mod by HextraOrdinary 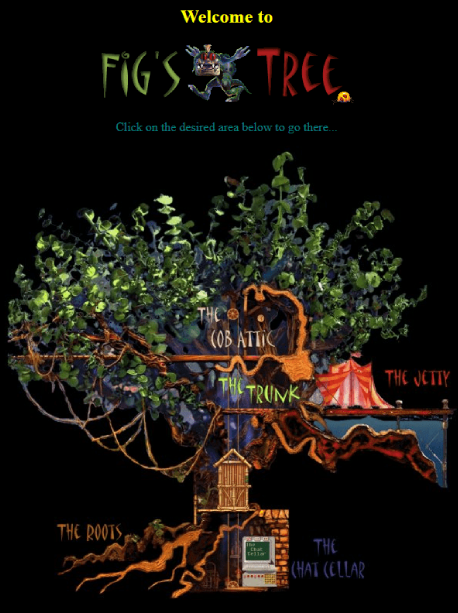 The homepage of "Fig's Tree", A fansite for the Creatures games, using a tree from the series' landscape as inspiration

Fans of the Creatures games took a more careful, logical approach to caring for their pets...and this extended to their websites, as well. Homepages were designed after laboratories, forbidden palaces, and mysterious temples filled with ancient texts. Since the games are about studying artificial intelligence and genetics, fans took the time to record their family trees. Details like intelligence, strength, and cause of death were often noted. Extra robust norns were often put into contests called "Wolfling runs", where the norns are set out to fend for themselves, without any interaction from the player.

The start of a Creatures 2 norn family, from Adventures in Nornsitting! With norns named after anime characters

The Creatures community had their own mods, called "COBS" (short for "Creatures Objects"). These items could be anything from food, to toys, to new animals to populate the landscape your norns lived in. COBs could be helpful--like food that could last longer--or just totally absurd, like an evil Barney designed to tormet your creatures. Many fansites advertised themselves as archives of COB downloads, becoming libraries of new content for players to try out. 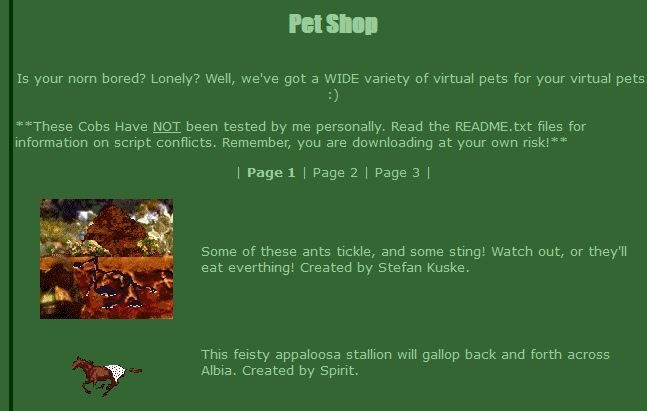 Pets for your pets! COBs offered on Norntropolis

The final installment of the Creatures series, Creatures 3, came with the addition of something called the "Docking Station". The Docking Station was an expansion pack for the game that allowed for online networking--which made adding user-made content even easier than it was before. There were mods for entire new worlds for norns to explore, and many exciting custom breeds. 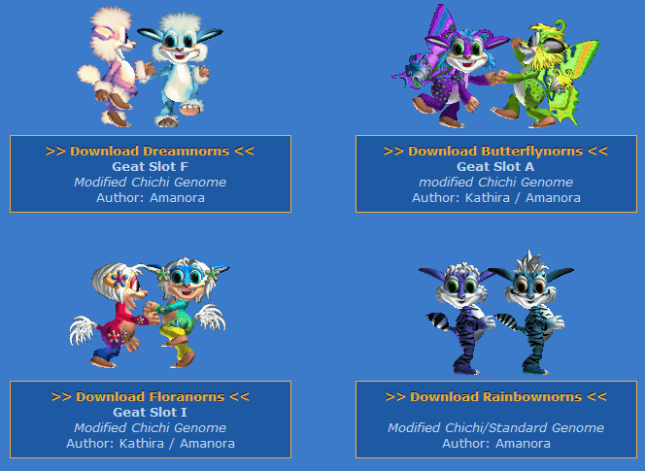 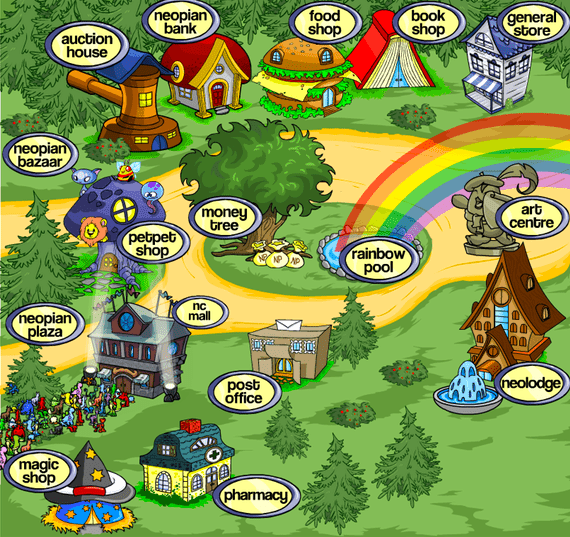 Of course, this article wouldn't be complete if we didn't talk about Neopets! Easily one of the most beloved virtual pet games out there, Neopets was one of the best places for young people to learn web design. It was a gateway of unbridled creativity for many children growing up in the early-to-mid-2000s--With its colorful fantasy world full of many secrets (that even warranted enough content for Iceberg videos!), its' unique characters and mythos inspired players to create their own stories within the universe. 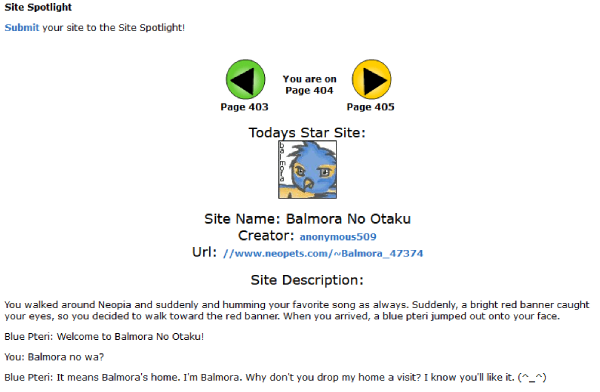 The Site Spotlight page on Neopets, for user Balmora_47374

While most people fondly remember their cuddly animal friends, Neopets actually had dozens of contests and events that prompted users to create. Many folks wrote their first line of HTML to customize their user profiles and "pet pages". "Pet Pages" were a single blank webpage given to each user per pet. Users could edit and decorate their page however they wanted, as long as they knew some HTML/CSS. There were page templates and adoptables for folks who struggled in the creative department. 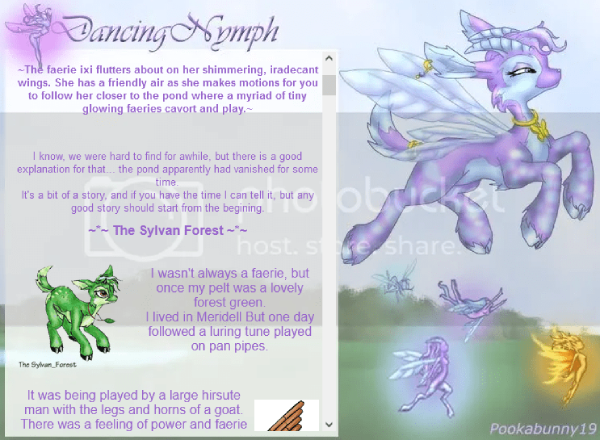 But for clever codesmiths, the pet page became a canvas: elaborate backstories of their pets were told, with gorgeous art as the backdrop, and young webmasters used the space as their playground. The space could be used however you wanted: you could tell a spooky ghost story, write tutorials for comic artists, or promote peace between squabbling species. The very best pages were chosen for a weekly chance to be featured in Neopet's Site Spotlight. 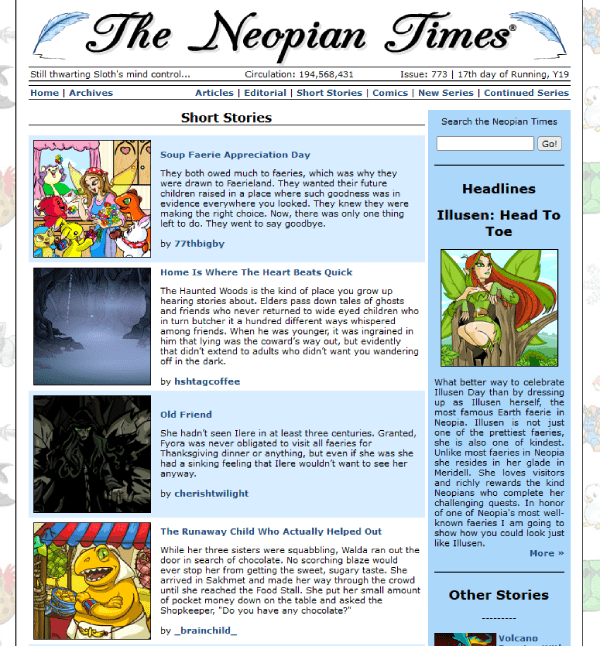 An issue of Neopets' newspaper, The Neopian Times, filled with short stories and articles submitted by users

If coding wasn't your cup of tea, there were still plenty of other opportunities to flex your creative muscles! Short story contests, poetry spotlights, fan art galleries, and even choose-your-own-adventure games were just a few options for fun events to participate in. (The "Beauty Contest" was my personal favorite growing up!) These prompts, paired with a healthy dose of friendly competition, pushed kids to broaden their horizons and learn new skills. It's safe to say that Neopets helped develop the modern internet, training beginner coders to build the web as we know it today.

The Petz fandom is being kept alive by devout fans. All versions of the games have been modded for modern PCs. Forums and fansites are still a common way to communicate in the community. New events, contests, and hex content are available on the regular.

The Creatures games have re-released on Steam and GOG. Discord communities and forums share new COBs, mods, and events. The last community Wolfling run event was as recent as 2021!

Neopets is still alive and well! (Albiet looking a bit different these days, after being upgraded for modern browsers...) The Neopets Classic project is working on putting together an authentic "old school" Neopets experience.

Out of all the sights on the world wide web, one thing can be observed everywhere: nothing can come between a human and their animal companion...even if that animal doesn't exist in the physical! I hope this inspires you out there to check out some of these games yourself--and maybe you'll even make your own virtual pet content one day! You never know when the muse of inspiration will find you!

This article was created by TeddybearHalo